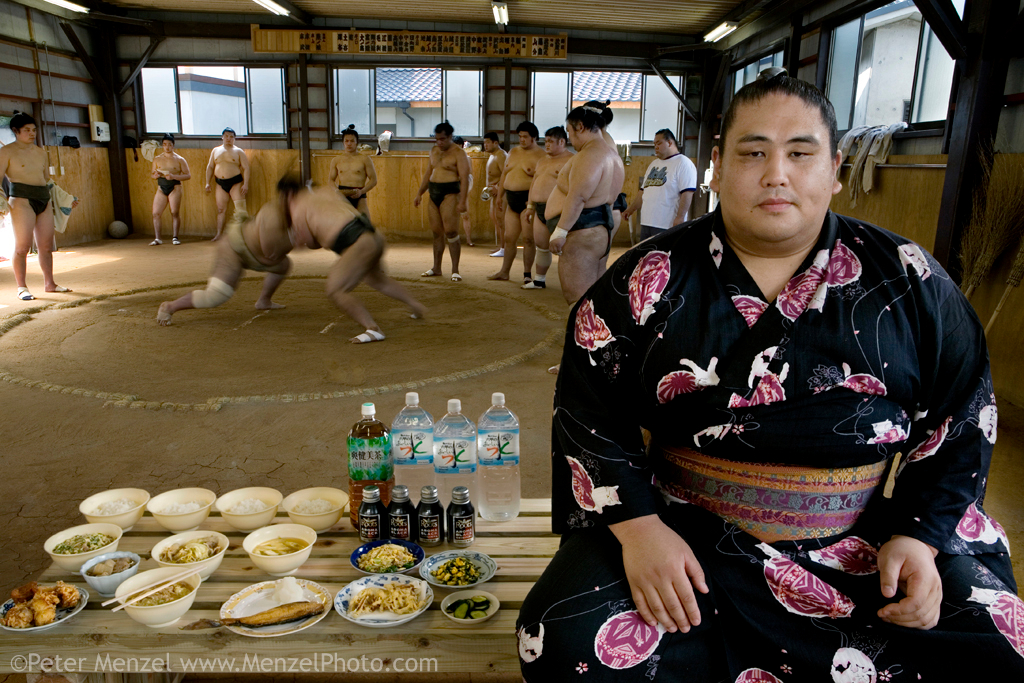 Takeuchi Masato, a professional sumo wrestler whose ring name is Miyabiyama (meaning “Graceful Mountain”), with his day’s worth of food in the team’s practice ring in Nagoya, Japan. (From the book What I Eat: Around the World in 80 Diets.) The caloric value of his typical day’s worth of food in June was 3500 kcals. He is 29 years of age; 6 feet, 2 inches tall; and 400 pounds. Miyabiyama’s stable runs through a brutal three-hour practice—sweaty, combative, and silent. Miyabiyama wears the white mawashi (at left) denoting his sekitori status during practice. His food may not look like much for a 400-pound man, but it’s enough to maintain his weight and give him energy for the ring. When he isn’t in intensive training before a match, he is wined and dined nightly by sponsors. The portrait above is a composite, taken on two consecutive days: the sumo association wouldn’t allow Miyabiyama to be photographed during practice. Miyabiyama (His ring name—Masato Takeuchi is his given name), 29, a sumo wrestler with the Musashigawa Beya of Tokyo is that stable’s (beya’s) premier wrestler and is currently at the sekiwake (junior champion) level. He is one of the largest of the Japanese sumos and would probably have moved up even further in the ranks had he not suffered a severe shoulder injury. He is only just now returning to matches. Sumos cook and eat chanko nabe—a stew pot of vegetable and meat or fish at nearly every meal. It is eaten with copious amounts of rice and numerous side dishes. Miyabiyama eats now to maintain his weight rather than to gain it, unlike the younger less gargantuan wrestlers in his stable who are eating a lot to pack on weight. Although he is wined and dined by the sponsors of his team, during the period of these photographs he was training for the next matches in Nagoya, and therefore he wasn’t eating out in restaurants nor drinking alcohol. MODEL RELEASED.