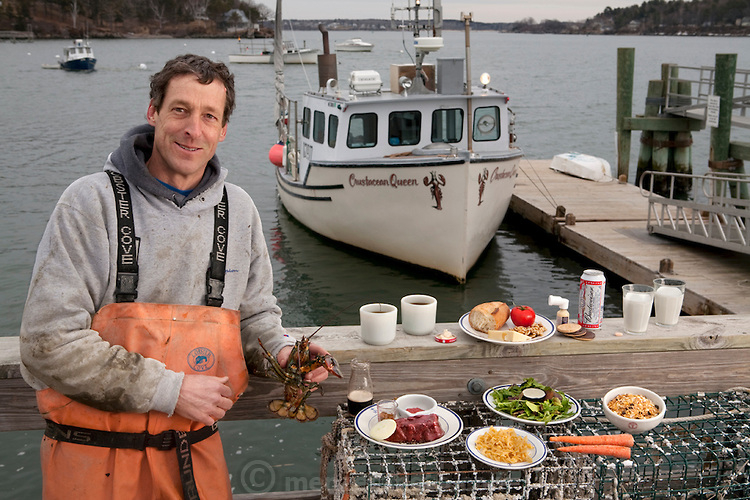 Samuel Tucker, a lobsterman, with his typical day’s worth of food in front of his boat at the Great Diamond Island dock in Maine. (From the book What I Eat: Around the World in 80 Diets.) The caloric value of his day’s worth of food in March was 3,800 kcals. He is 50 years of age; 6 feet, 1.5 inches tall; and 179 pounds. Sam works the lobster boat by himself, saving on labor, but in the summertime his son Scout comes along. “He’s a blast,” says Sam. “I take him and some of his friends out; they’re all just leaning over the rail in their life preservers looking to see what’s in the trap when it comes up. They’re pretty good at saying, ‘He’s got a keeper.’” Sam’s state license restricts his traps to the bay, where he averages only one lobster for every two traps. After paying for fuel and bait, there’s not much profit. He supplements his income with fish auction commissions, and his family’s diet with venison culled from the island’s deer population. MODEL RELEASED.