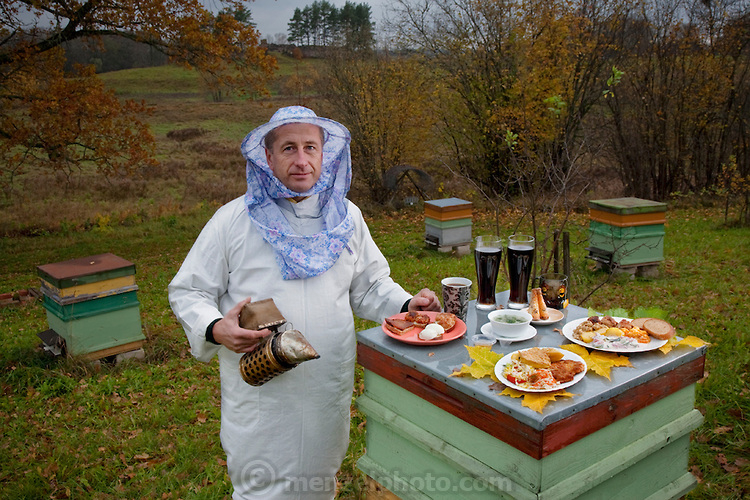 Aivars Radziņš, a forester and beekeeper, wearing his bee-kleeping clothes, with a smoker and his typical day’s worth of food in his backyard in Vecpiebalga, Latvia. (From the book What I Eat: Around the World in 80 Diets.) The caloric value of his typical cday’s worth of food on a day in the month of October was 3100 kcals. He is 45 years of age; 5 feet, 8.5 inches tall; and 143 pounds. Since Aivars’s government salary and his wife’s pay as a rural doctor are both very low in this former Soviet republic, he used inherited beehives to create a home business producing honey to supplement their income. Aivars wears a nineteenth-century Latvian outfit when selling honey at local festivals and markets; last summer at the Latvian Song and Dance Festival his traditional dress took first prize. Although rich in culture and architecture, Latvia is among the poorest and least populated members of the European Union; its population has declined since gaining independence in 1991. MODEL RELEASED.